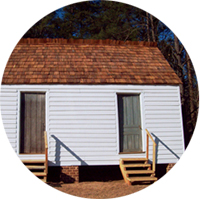 The newest cabin on the farm, the Williams-Earle Cabin opened in February, 2010. It was originally located near Greenville Memorial Hospital on Grove Road, as part of the Williams-Earle Plantation. Documents and oral history lead us to believe that it was built as a slave cabin in about 1845 and was inhabited by Moses and Rita Maxwell, and Susan, a seamstress. After the Civil War, it was used as a tenant farmer’s or sharecropper’s cabin until the 1920’s. Thanks to grants from the History Channel and the National Endowment for the Humanities, and a lot of volunteer labor, the cabin was saved from destruction and relocated to the farm.